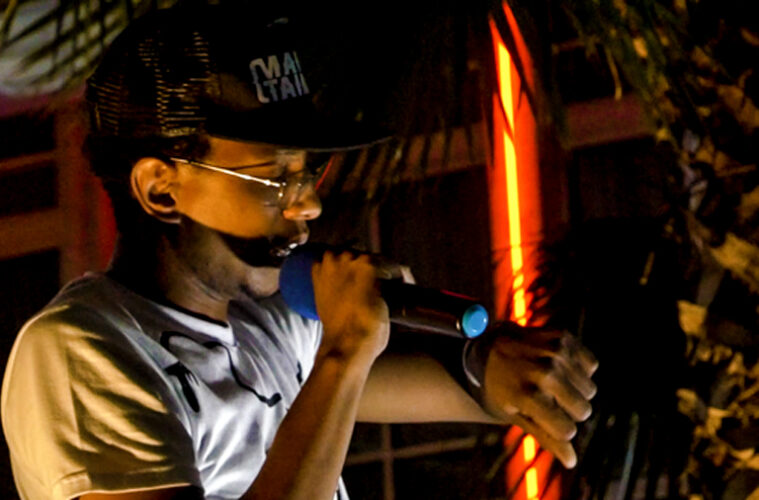 In the final rounds of the 2020 Master of the Mic Quarantine Edition, Maintain pulled away from his competitors with a force of will and determination that would impress the grittiest of prize fighter.
Like a fighter in the final rounds intensely aware of a tight score card, Maintain calmly dug down deep and came with the extra swagger and energy needed to separate himself from the other contestants.

In the sparsely filled cabaña at the Lorenzo hotel, after many rounds that narrowed his competition to 2 highly skilled opponents, Maintain made his last stand in the dark shadows of the hotel and amongst the cold company of unexpecting bystanders resistant and somewhat confused by the notion of becoming a makeshift audience for an online event that they never heard of. It was here that Maintain harnessed the negative energy of awkwardness, then with style and grace, forged a momentum that seemingly appeared right out of the thin balmy Sunday evening air.

My thought process was; when the crowd at first wasn’t showing any love; to take that negative energy and make something positve…

…and when my confidence flowed through the performance, that was enough to at least win a few of them over

The up and coming artist performed as if he was on a big venue stage and as if he knew he was taking home a win. With a record that spiraled into hard hitting punchlines and clever catch phrases like

I can’t forget Gabrielle if we ever had a Union, I would make you yell. Fuck you until your eyes rolled back or until you tell. You probably bang on the rail, music loud, no one can tell.

it became obvious that the kid had the verbal skill to match the intensity of his performance.

The judges were obviously feeling the talent on showcase by all the finalist but in the end it was Maintain’s enthusiasm that motivated the judges’ final decision.